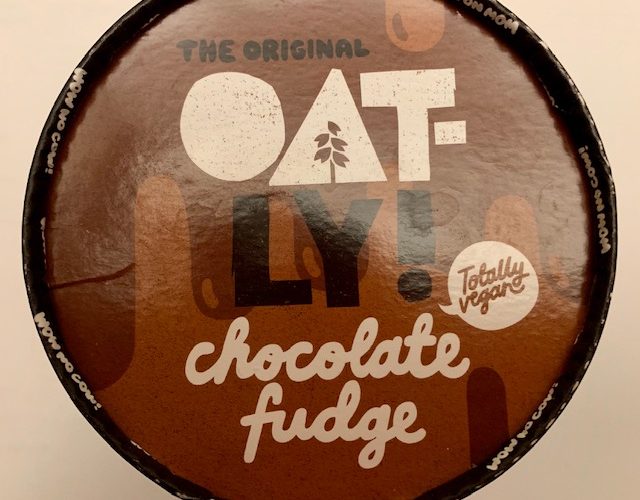 It can be a dangerous business sending your other half to do some shopping. Can you pop in the supermarket on the way home and grab some mushrooms I said. No problem he said. I should have been suspicious when he was back rather later than expected. Then he produced this like a magician from behind his back with a big cheezy grin on his face:

Well, the girls whooped and I was rather pleased. Who doesn’t like ice-cream on a random Thursday night? Not seen it before he said so thought we’d better try it.

On first glance I had high hopes. We’ve had loads of the Oatly products now and they all taste great and do exactly what they say on the tin so to speak. Lets see if they could do for icecream what they have done for single cream, creme fraiche and barista milk.

In a word – Yes – they’ve come up trumps again. The whole family enjoyed this product. It was creamy and very chocolately. I particularly liked the swirls of chocolate sauce running through it. And there was no aftertaste like you get with some soya products. Probably because it is made from oats – duh!

This is most definitely a treat food. Just because it is vegan does not make it healthy. The second ingredient is sugar followed by more sugar and then sugar and then various types of fat. It slightly has the edge over a similar tub of Ben & Jerrys but literally by a squeak of a margin.

Would I buy it again? Well I’m sure Jonathan and the girls will sneak it in the basket at the next opportunity and I won’t complain.

Word of warning – it melts quickly so advantage is you can serve it straight from the freezer rather than having to wait salivating for 5 mins only to give up and nearly sprain your wrist serving it up. Also means don’t hang around eating it up or you’ll have a bowl of runny chocolate sauce.

And a final note, I really like the branding of the Oatly products. The packaging is fun and there is always some witty comment somewhere that makes me smile like in the last photo. Keep it up Oatly!