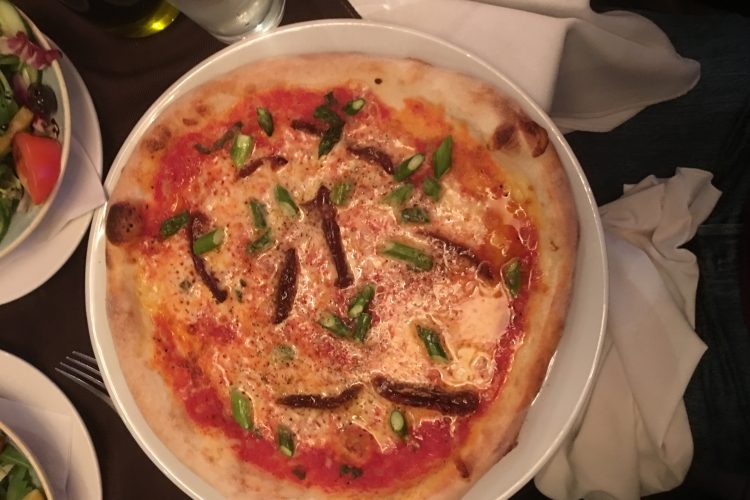 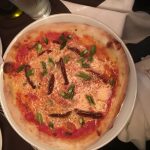 Il Vecchio looks to be a converted pub based in Heywood, Greater Manchester. We wouldn’t have a clue where it was if it wasn’t for the East Lancashire Steam Railway departing from Heywood station 100 yards away, and a very convenient restaurant to go to after going on the Santa Train!

We can start this review with a photo. Can you spot the deliberate mistake?

Firstly this was December 21st and the restaurant was very busy. They took a 5 pm reservation from us with the warning that we would need to be out by 7 pm. We paid £100 deposit up front (there were 12 of us), which was fair enough. We had a young baby in our party and the waiters and waitresses were great with her and the other children in the party.

We have been to Il Vecchio before and I have to say that their pizzas and tiramisu are delicious. The staff are very friendly and accommodating, and the atmosphere is one of a busy, popular restaurant. We had the pleasure of being seated behind a works party out on the lash, although this was hardly the restaurant’s fault. I mainly had the Asparagi pizza with a shared Insalata Mista side salad. The pizza had a well cooked base that tasted fresh, not too doughy with a hint of crispiness around the crust. There wasn’t a huge amount of asparagus on the pizza, but it was enough. I didn’t notice too many sun-blushed tomatoes, which were in the description, although there were more than a few sun-dried tomatoes liberally added on top.

The Insalata Mista was exactly as you would expect – a mix of reasonably fresh salad vegetables – just the right size.

For pudding, I enjoyed the tiramisu, which was described as homemade and tasted like it was. Delicious. In fact so delicious I forgot to take a photograph of it.

For food, Il Vecchio is not bad at all and reasonably priced. Shame there are not more vegetarian pizza options – if you don’t like goats cheese (and don’t want to ask for its removal) then there is only a Margherita available. We didn’t leave a tip after the bill arrived with the £100 deposit not deducted. Call me cynical if you will, but in my opinion, any large parties out boozing may well not notice that they have already been billed for a deposit (we had to check our bank balance to make sure). It would be a surefire way of increasing the restaurant’s profits for the month quite dramatically!

I popped to the loo and discovered a pair of wellies would be useful – I thought there was a rather strong smell of beery urine and a lot of the yellow stuff swirling around on the floor. Probably in keeping from the days when the restaurant was a pub and there was a lock-in.

Echoing what the others are saying, the menu wasn’t the easiest to negotiate if you were vegetarian. I could give them credit and suggest perhaps they hadn’t listed some of the dishes as vegetarian because they had Parmesan in but given they think squid is vegetarian I don’t think they are that sophisticated. Also, the girls’ pasta dish didn’t contain Parmesan so who knows.

I definitely wouldn’t recommend coming here if you are vegan. There wasn’t even the usual go to of spaghetti with a basic tomato sauce. All the veggie dishes had cheese in and I would imagine difficult to adapt.

One of the bonuses of Italian restaurants is that you can quite easily share a meal if you want to and they always seem happy to provide an extra plate especially if there are children. With that in mind and given the confusing menu, we decided to order 2 pizzas between me, Jonathan and Cerys plus a couple of side salads. There were 3 veggie pizzas on the menu: a Margherita and 2 others both with goats cheese on for some reason. However, we pre-ordered them without goats cheese and I’m happy to say the restaurant got this right and they were goats cheese free.

We basically had an asparagus pizza (yep I know, totally the wrong season) and a red pepper and pesto pizza (yep I know, pesto might contain Parmesan and we’ve already established the “v” sign on the menu was less than reliable). However, this place can sure cook a pizza – really tasty base with the right amount of crispness, good tomato sauce and just about enough topping. Salads were OK. I preferred the rocket salad and it was definitely fresher than the Insalata.

In summary, great food if you turn a blind eye to the menu disfunctions. The choice could be better and would be nice to see an option more in keeping with the season.

Il Vecchio was a very lively place to eat out. We had a large party of family and friends with us, so we had to order in advance. I chose to have the ‘ravioli con spinaci e ricotta’ which came with no meat but for some reason did not have a ‘v’ sign next to it. It tasted nice though the pasta was quite chewy and there was not that much spinach on or in it.

For pudding I shared the profiteroles with Emily. They were pretty much a pile of chocolate mousse covered balls of pastry and cream but tasted nice. Cerys had the lemon cheesecake, but it was so big we had to finish it off for her!

We all enjoyed the novelty of the vegetarian squid, it made me laugh when I saw the pictures on this website. Overall though I think it was an alright place to eat out.

Il Vecchio was a great place to eat out for larger parties. In order to speed up our meals, we had to order in advance. Mum, Dad and I decided to share the Asparagi and Pinocchio pizzas. I don’t like goat’s cheese,so we ordered them without it. I also had some of the Insalata Mista salad. The Asparagi pizza tasted amazing although it was dripping with oil. The Pinocchio pizza tasted really nice and I thought that the red peppers and the pesto worked really well together. The Insalata Mista salad was quite plain and I think they should have put slightly more balsamic vinegar on it.

For pudding, I had the lemon cheesecake. It was really delicious however it was covered with strawberry sauce. The sauce tasted artificial and I think I would have enjoyed it more without the sauce.

One problem with the restaurant was that the menu wasn’t great. There were only three vegetarian pizzas and no veggie mains or pasta. Or so they said. Catrin and Emily both had the Ravioli con Spinaci e Ricotta and there was no reason as to why they couldn’t have put a ‘v’ sign next to it. However, there was a ‘v’ next to the squid so therefore I don’t think their menu was very reliable.

Overall, I think it was a great place to eat out however, vegetarians have to read the menu carefully.

I had the Ravioli con Spinaci e Ricotta which was Egg ravioli filled with ricotta, spinach, tomato and basil sauce. It was delicious. The portion size was okay but if you were quite hungry it would be on the smaller end of the scale. It thought it had plenty of the tomato sauce which was well seasoned. There were probably around 8 ravioli in total. However, if you ate them by themselves they didn’t have much taste as they weren’t filled with very much spinach and ricotta.

For pudding I shared profiteroles with my sister. The profiteroles in my opinion were scrumptious as they were covered in a layer of rich chocolate mousse and inside it was oozing with cream. There were three normal sized profiteroles in total which was enough to share between my sister and I.

Overall the meal was tasty and big enough for me however the menu was quite confusing as they had their ‘v’ signs in the wrong places.  It was hard to tell if the ‘v’ signs were for vegetarians or vegans as there wasn’t a sign on my dish. 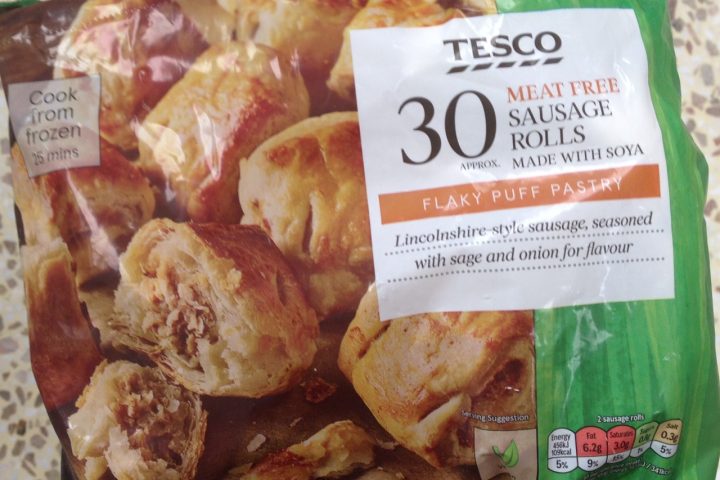 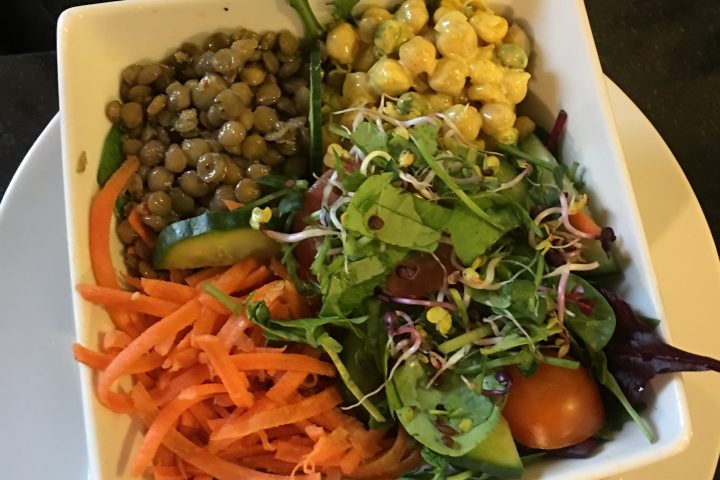