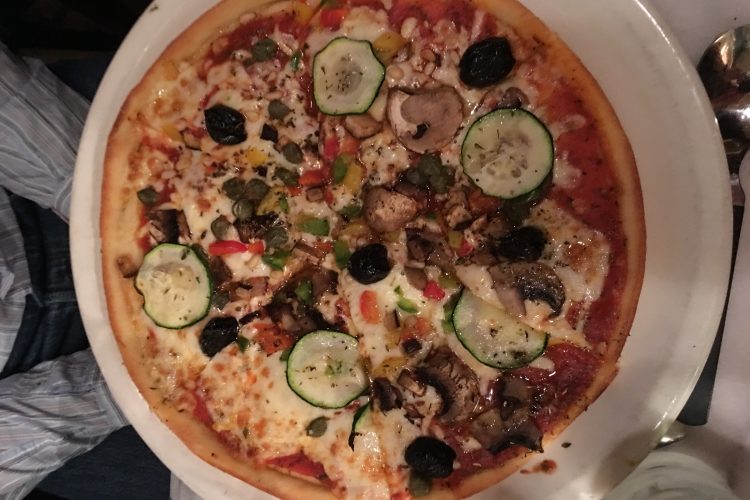 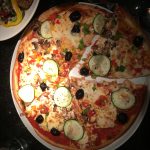 Zeffirellis is a vegetarian Italian restaurant (not many of those around). It’s plush with banquet seating, subdued lighting, wall art and an interesting waterfall sculpture in the middle. Wholefood vegetarian this is not!

There were 10 of us all together including 2 small children so we opted for an early table at 6 pm. It was very busy when we arrived and was still busy when we left a couple of hours later, testament to its popularity. Booking is advised.

The menu is large with a choice of 8 pastas, a further 7 mains and 10 pizzas. Vegan and gluten free options are clearly marked. Vegans have a good choice with 3 of the pasta dishes and 4 other main courses suitable. None of the pizzas were marked as suitable for vegans but would be worth checking as the pizzas were made to order so suspect they might be able to leave off the cheese.

As I’ve found in most Italian restaurants they are always extremely accomodating with children. All the main meals and pizzas were available as a child size portion doing away with the need for a separate childrens menu. The staff were very friendly and were very patient despite 2 glasses of juice going everywhere and a washload of napkins used to mop it up!

Ambleside causes me a headache every time we go there. Instead of the usual restaurant order, which consists of looking at a choice of one dish and ordering it, I have to actually make a decision every time we eat out! Hard work after 20 years of vegetarian food ordering…

The pizza I ordered, The Big One, was quite big, with plenty of topping on it. The crust was just right – not too doughy, but similarly not too crunchy from overcooking. Our starter was similarly very tasty, being a sharing platter for the table, and not too large when puddings were going to have to get consumed. The fact we were staying in the Youth Hostel just up the road assisted in the writing of this review, because the adults were able to consume two bottles of delicious vegetarian red wine before staggering home to our bunks. I enjoyed the cheesecake of the day (in a glass) for pudding as well – unfortunately I ate it before remembering to take a photo, but it was delicious.

Appetites were assisted by the long walk (for 5 year olds) we did during the day up Loughrigg – what a beautiful spot.

Decisions, decisions! Downside to going to a vegetarian is having an entire menu to choose from rather than just the one choice. As a starter, we opted to order a couple of “sharing platters” for the table. Good choice with small children as means they have something to nibble on and keeps them occupied. There were ramekins of: hummus, homemade pesto, roasted veg, olives, salad and some toast for dipping. Everything was delicious. The pesto was some of the best I’ve eaten. The only downside is there was only a small amount of toast and we could have definitely done with some more.

Me and Jonathan decided to order 2 different pizzas and then share so we could sample more dishes. Jonathan liked the sound of The Big One (see Emily’s review for a list of toppings) and I fancied the Toscana (tomato sauce, red peppers, goats cheese, pine nuts and rocket). I thought both pizzas were good although personal preference was for the Toscana. Plenty of toppings, excellent sauce. My only slight gripe was that the base sort of got lost under the toppings so you couldn’t really taste it but I’m sure others would disagree.

It was extremely hot in the restaurant and I was quite full from the pizza so I ordered sorbet for dessert, a scoop of lemon and a scoop of raspberry. Lovely, refreshing and cooling.

At Zeffirellis Cerys and I shared the Big One pizza which was topped with zeff’s tomato sauce, aubergines, courgettes, mushrooms, peppers, pine kernels,olives and capers with mozzarella and cheddar. We got it in the grandé size so that we could share it. We asked for it without aubergines and capers which they managed to do. The pizza was covered with plenty of the tasty topping. It was covered with lots of mozzarella which meant that I loved it even more. The only thing that I would have liked to be different is that the pizza was covered in a bit to much oil.

For dessert Cerys and I shared the chocolate one of Zeffirellis Speciality Sundaes which was a 3 scoops of ice-cream (chocolate, coffee and vanilla) with a swirl of cream on the top covered in chocolate sauce. Also on top were 2 wafers and chocolate twirls. At the bottom of the glass we think there were ameretto biscuits. I really enjoyed this sundae as it was different by having coffee ice-cream and also having 2 wafers so we didn’t have to share 1 wafer.

At Zeffirelli’s I shared the Big One pizza with Emily. I don’t like aubergine and she doesn’t like capers and so we ordered it without them. The staff were really good and didn’t get it mixed up with different ingredients. The actual pizza was really good and tasted really nice.

During the meal my cousin managed to knock over two glasses of juice and the staff didn’t seem to mind the amount of napkins we used trying to mop it up.

For pudding I shared the chocolate Zeffirelli’s special sundae with Emily. It was really nice and chocolatey and it came with plenty of stuff for two people. I would definitely not have been able to eat it all myself.

When we went to Zeffirellis I did not feel like having very much so after a starter of bread, olives and the rest I had the Pomodoro Spaghetti which was their classic Italian tomato sauce served with spaghetti with a sprinkle of parmesan on top. The sauce tasted quite sweet and had a strong taste of tomato but they served it with quite a lot of coriander on top which was fine with me but for some children it would probably have been too strong a taste.

For pud I had the Original Italian Tiramisu which was traditional Italian trifle: liqueur and coffee soaked sponge with a rich mascarpone topping. It was absolutely delicious! It had a very strong taste of alcohol and coffee but they only served a little bit of the soaked sponge so it was not over powering. The mascarpone topping was creamy and on top there was a sprinkle of chocolate shavings a wafer and two strawberries which gave it a lovely, sweet, cocoey taste.

Overall I think Zeffirellis was a good place to dine out with adults and kids alike.

I am a 14yr old girl currently doing my first year of GCSEs. I am a flexipescetarian meaning I occasionally eat meat but mainly stick to a pescetarian diet.